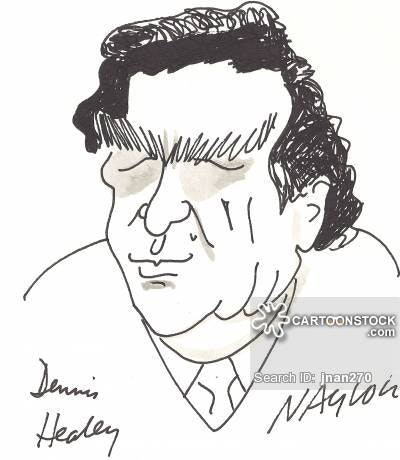 RIP Dennis Healey today. Tell you a true story. So, in my early days of work, pre pop vid, I often used to go to No. 10 with my boss Stanley Hyland, who had been a deputy head of current affairs at the BBC. A proper old Yorkshireman he was too. He'd grown up with Dennis Healey, literally part of the time in the same house, I believe, and although we worked with many politicians training them to go on TV of course his work with Dennis was special. I was just the little runt (that's an 'r') in the corner who filmed all this on a Sony video camera in black and white. (Often, I would go on to gigs with the same camera and film bands like The Specials on stage.) One time we go to No. 10 and we had been working in the main cabinet room when Dennis had gone off to have a bath before he went on to Panorama to be interviewed by the rottweiler Robin Day. Just as I was clearing up the equipment to head back to Covent Garden I found a booklet on top of my stuff stamped with a government stamp, saying "Top Secret." I thumbed my way through it and saw "nuclear submarine," this, and "atomic bomb," that. True! Two minutes later Dennis appears back at the doorway of the cabinet room to say, "Has anyone seen a top secret document?" Wrapped now just in a towel, he'd literally jumped out of the bath, had come back, and his face was all red. All true. Hard to write in words his tum-te-tum way of speaking, which made it especially comical, but a few Brits will remember him well and his speech manner. Anyway, I genuinely remember him being the sort of politician who might stand up on a soap box and say it like it is from their heart, rather than what they thought would win votes and keep them in power. On the other hand, maybe that's all changed, right, if the press don't crucify Corbyn? As a final footnote, I am not proud to say Labour did not win the election that time and lost power, meaning a certain lady who was not for turning, Mrs T, got it and ruined the whole country for many years to come.